We recently ran into buggy behavior with the Azure load balancers which sit in front of an App Service and distribute the traffic between each server instance. It manifested as peaky CPU load on one of the horizontally scaled-out instances in the App Service Plan. At seemingly random times, monitoring alerts would fire for dropped requests and request latencies going over SLA thresholds. Each time, the source was the same; one of the app service instances was suffering extremely high CPU load. 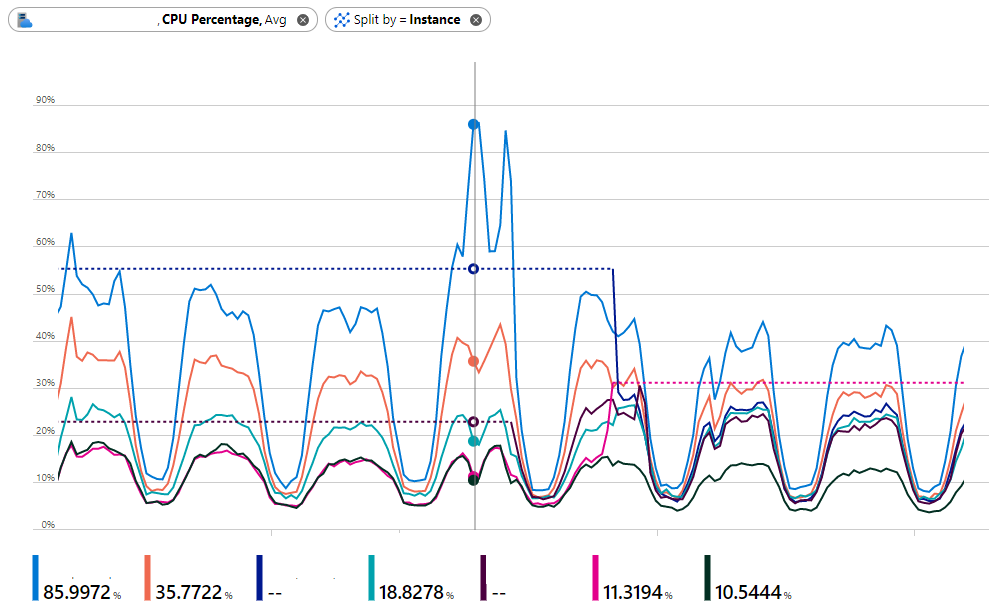 To compensate, we increased the number of instances to 5-6 S3 instances (4 CPU, 7 GB RAM, ~400 ACU) costing about €1500 p/m. With 5 instances you can still see imbalance in the above image. The blue server is peaking out at ~85% CPU utilization, while the pink & black instances are completely under utilized. At 4 instances this was even more pronounced and eventually the blue server would crumple under the load as the number of queued connections and requests increased.

This was bad! Aside from a server instance going down:

At this point we escalated the issue to Azure Support

Hi Azure Support, you appear to have a problem with your load balancers!

Nah, we’re good, they’re working as expected, you appear to have a problem with your app!

Frustrating! But starting to make sense. Azure load balancers (both the PaaS product, and the those which sit in front of App Services) are network-level technology. They use a 5-tuple hash algorithm to decide where to route traffic based on:

It’s not a pure, random-distribution, round-robin approach. And it doesn’t take things into account like the Application & URL routes of the HTTP service been called.

A little more digging and we get to the source of the issue. The app service plan was hosting 2 separate applications, with 2 very different CPU utilization profiles.

While the overall distribution of requests is being evenly spread across all the server instances, there is a very uneven distribution of Application traffic to each instance. 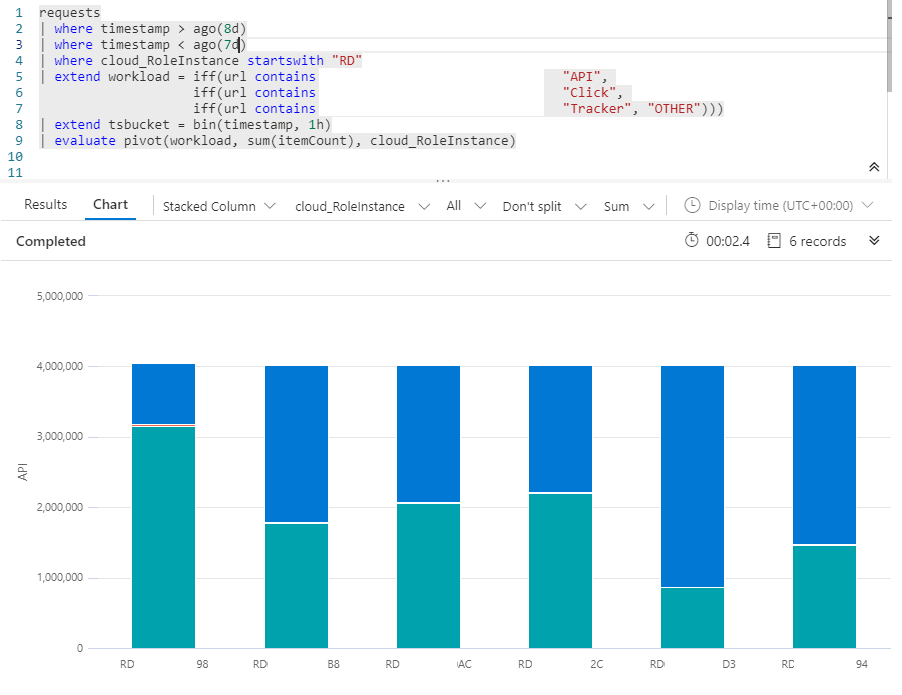 In the above bar chart the green segments are the light weight click & tracking requests. The blue segments are the CPU intensive API calls. For this 24 hour period, the 5th server, RD***D3 is getting hammered by CPU-intensive requests (accounting for > 75% of it’s request count) where as the 1st server, RD**98 spends most of it’s time serving simple static content and 302 redirects.

The solve was pretty obvious in hindsight, and is alluded to in a single line of Azure documentation

Thankfully our API endpoints were already in two separate .NET projects, deployed to 2 separate app services. If they’d been different endpoints in the same project, this would have been a more time consuming solve. Moving an App Service to a different plan is straight forward within the same region and resource group.

First, we moved the CPU heavy API application into it’s own dedicated App Service Plan. Then we changed the scale up & scale out configuration for each of the two different app service plans to accommodate their specific CPU utilization profiles.

With these changes we’re seeing a whole host of improvements

Read to end using stdin from the console

Published on May 30, 2018
comments powered by Disqus