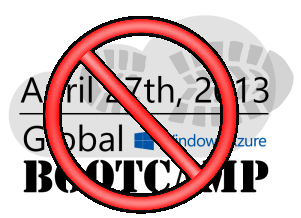 This weekend, I attended the Global Windows Azure Deep Dive conference in the National College of Ireland, Dublin. This was a community organised event where Local & National IT Organisations, Educational Institutions & .NET Communities were running a series of events in parallel in a number of cities around the world. The purpose; Deep Dive into the latest technology available on Microsoft as well as take part in a massively parallel lab where participants from all over the world would spin up worker roles to contribute to 3D graphics rendering based on depth data from a KINECT. Alas, Deep it was not, and Dive we didn't.

I suppose I can't complain too much. You get what you pay for and it was a free event but I'd have serious reservations about attending this type of session again. Don't get me wrong, I don't want to sound ungrateful, and fair dues to the organisers for holding the event but if you're going to advertise something as a "Deep Dive" or a "Bootcamp" then that has certain connotations that there would actually be some Advanced Hands-on learning.

Instead the day would barely have qualified as a Level 100 introduction to 2 or 3 Windows Azure technologies interspersed with Sales Pitches, Student Demo's of their project work and filler talks relating to cloud computing in general. Probably most disappointingly we didn't actually take part in the RenderLab experiment which kinda torpedoed the "Global" aspect of the day as well. You can see the agenda below. I've highlighted the practical aspects in Red.

Alas even the practical aspects of the day were extremely basic and the kinda of thing that most people in the room had done/could do in their own spare time.

At 15:30 we left... I didn't have another lecture in me, although at least we'd had the common courtesy to stay that long. Half the room didn't come back after lunch.

The takeaways; I know that alot of time and effort goes into these events, and particularly when they are free, that time and effort is greatly appreciated. But you need to make sure you get your audience right. If you advertise Advanced and deliver basic, people will be disappointed. That was clear from the mass exodus that occured during the day... I'm kinda curious to know if there was anyone around for the Q&A at all. I'll be sure as heck checking the agenda on these type of events before committing my time to them in future. We aren't currently using Windows Azure in our company yet, and embarrassingly I had been promoting it internally and had convinced several of my colleagues to give up their Saturday for it.